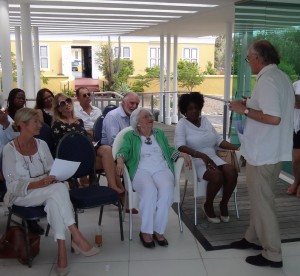 During the last two decades before the Second World War the serialization of novels originally written in Papiamentu was exploited as never before. Willem Kroon, Manuel Fraai, Miguel Suriel, Emilio Davelaar and a few other local authors set their minds on ‘visualizing’ for the Afro-Curaçaoan population the dangers of modern civilization. In their so called thesis novels in Papiamento Kroon and his fellow authors were to draw attention exclusively to the unfavorable effects of the enormous socio-cultural changes, while offering Roman Catholicism as the sole and firm grip to hold on to.

From libraries and archives that specialize in Antillean history I dug up the necessary information about these novelists, their work and propaganda. This I did for my Ph.D. thesis – The Rise of a Caribbean Island’s Literature (1990) – and for over a dozen articles that followed it. One of these libraries / archives was the S.A.L. (Mongui) Maduro Library, over the years diligently expanded and aggrandized by Mongui’s daughter Ena Dankmeijer-Maduro. It provided so many sources that it took me numerous weeks to even finger through the heaps of documentary data. Invariably shon Ena showed particular concern for the progress of my research and would suggest files to dig into. Indeed, I was not the only one to experience this motivating commitment.

For any researcher the most rewarding experience is to hit on information that is so unexpected and unique that it will change the course of your research. In shon Ena’s Library, hidden amongst the hundreds of paper clippings, there are half a dozen clippings of texts by Willem Kroon from the weekly paper La Prensa of the early 1930’s. La Prensa was named ‘The Devil’s Newspaper’, while it took an anti-papal stand in every respect. Quite unexpectedly Willem Kroon appeared to have severely criticized the Roman Catholic Mission for reasons that undeniably have a convincing ground and that gave insight in social processes that were only beginning to gain ground and would – after decades – lead to strong outbursts of social and ethnic discontent.

It should not come as a surprise that I cherish scores of pleasant memories of lengthy stays in the library and, more particularly, of shon Ena’s inspiring interest in research, in collecting archival sources, books and journals, in creating the appropriate ambiance to study and to learn. Such a privilege to have been tutored by shon Ena!